What does Liposuction mean?

Most individuals who encounter a chubby person immediately respond by thinking that the overweight individual should seek liposuction.

People often seem to imagine liposuction as a technique involving a hose pipe being taken, and wedged into the patient whilst a machine extracts the fat efficiently leaving the patient with an ideal figure.

Unfortunately, in reality it is not so straightforward. Competent liposuction needs precise surgical skills, the individual surgeon must be highly experienced, and he/she must possess fine motor control and aesthetic feeling. Unfortunately, this is precisely the reason for one or the other catastrophe or failed surgery that arrives in our medical practice for advice and an aesthetic solution. Frequently, physicians who are really skilled in their specialities, believe that “bits of fat should simply be easily suctioned away” for good money. Such an approach often results in deep holes, dimples and deformities of body contour, therefore, unfortunately most of these patients regret having sought help.

The modern “Tumescent Technique”, also referred to as the “Super Wet Technique”. This is a further development of ILLOUZ’s originally introduced technique of liposuction which was implemented in the mid-seventies. Multiple specialists like GASPAROTTI (Rome, Italy) or PITMAN (USA) and others have improved this procedure continuously, each with superior and innovative ideas.

The term “tumescent” is related to the Latin word “tumescere”, which means to “blow up” or inflate.With this technique, greater amounts of fluids are injected into the tissue of the body area which is to be reduced. The fluids contain local anaesthetics, adrenaline to reduce bleeding and small amounts of cortisone to reduce swelling. The fluids are either injected by pumps, through slow infusion or - our preferred method - through direct, careful and aimed injection into the tissue, by hand. This fluid is distributed equally into both sides of the trunk or extremities. Then the infiltrated regions are marked carefully pre-operatively by myself, while the patient checks, so that her / his regions of choice are included.

All infiltrated regions and amounts get documented in a separate liposuction protocol, to achieve optimal symmetry.

Subsequently, the tumescent fluids are carefully injected through very small skin incisions (skin cuts) in concealed places. The extension of fluids under the skin is the only part of the operation that can hurt slightly for a few seconds right at the beginning, because of the induced expansion (swelling up) of the tissues.

The tumescent solution takes at least 20 minutes to work. After this period of time, I commence the liposuction procedure through the same hidden skin incisions that were used to inject the fluids beforehand. The tissue is now blown up or extended to its maximum, with the fat cells loosely situated amongst the fluids in their original places. During liposuction, the fat cells can now easily be removed, while fibrous tissue, blood vessels and nerves can move away to the sides from the liposuction cannula’s blunt, round tip.The cannula’s diameter is usually a maximum of 3 mm. In our practice, the face is treated with even thinner cannulas of 1,5 - 2 mm in diameter. For this reason, there is absolutely no damage done to any nerves, vessels nor tissue. However, patients often experience slight bruising results from the extremely fine vessels being affected. Nevertheless, the bruising is temporary and does not make any difference to the result nor function, post-operatively.

The liposuction procedure can now take place without any pain. Our patients usually compare this to some kind of a “body massage” or “ a whirlpool". Sometimes patients prefer to fall asleep during this phase, but this is not permissable, because they have to help us maneuver their body to one side or the other, so that the suctioned regions can be formed equally and optimally.

Get further Information about Liposuction of Certain Parts of the Body with the Links Below:

Are there Alternatives for Liposuction?

Yes, there are. In the first place there is any kind of skin tuck. Although partially effective, it cannot reduce the thickness of the fatty tissue underneath the skin well and evenly, since this technique usually only improves the tension and smoothness of skin. The disadvantages of this procedure are much longer-term, since there are frequently broad and visible scars that usually get placed in the hidden or concealed areas of the body. 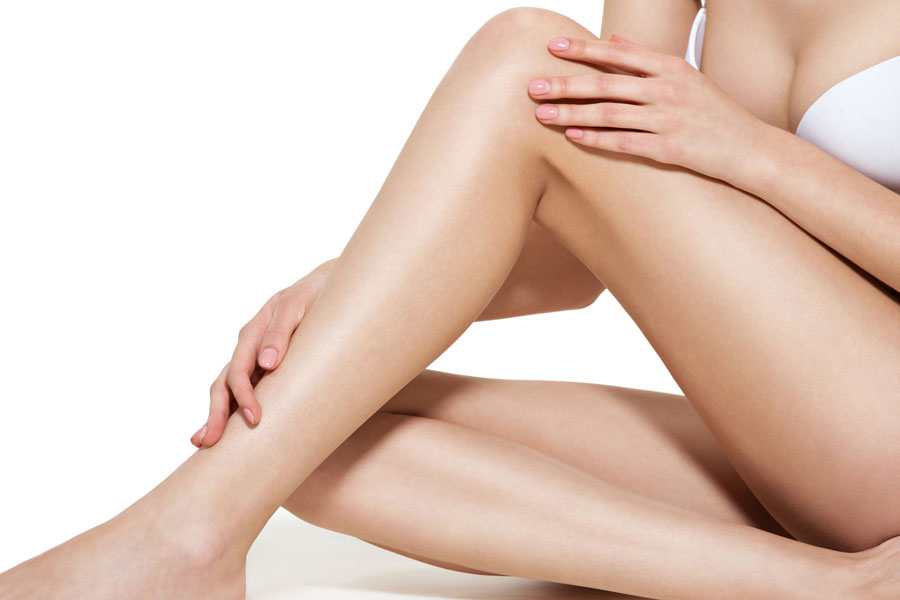 Newly advertised “non-operation” and „non-invasive“ methods like “Cool Sculpturing”, “Ultrasound Fat Reduction” or “Laser Fat Reduction” do work partially (usually much less intensive than liposuction). Their predominant advantage is an avoidance of operative procedures, which is good. The disadvantages are, that it usually takes many procedures or sessions of the same kind, to achieve a less effective result in comparison to the the liposuctions. However, that may be preferable for patients who do not have a significant problem.

The main disadvantage of the above-mentioned non-invasive treatments that I see is, that all these procedures are “closed procedures”. This means, that treated fat may be dissolved in the aimed areas, but the broken up fat from popped fat cells stays in the body, and gets taken away with the lymphatic drainage to be deposited in other regions, because our body will not waste any form of energy that it can keep. Therefore, in my opinion, all the new “fat reduction techniques” should be critically investigated, since they do not yield the really desired results.

Additionally, liposuction is able to achieve some kind of improvement in skin tension, whilst effectively removing the fat. Therefore, the skin tuck is not really an alternative to liposuction, but a supplement. Frequently, better results can be achieved by liposuction rather than by skin tucks. In other cases, a skin tuck can be more effective than liposuction. Usually, through superficial liposuction according to GASPAROTTI, a special technique, a relatively good improvement in skin tightening can be achieved, which prevents or precludes skin tucks with long scars.

I will always try to advise patients on the most effective and least scar-loaded technique for your, personal needs. I regard it as my professional responsibility to advise patients on the most suitable individual operation technique to you. This might also be a liposuction in the first place, followed by a skin tuck 6 to 12 months later, in order to achieve the best possible results. This is especially common in rare cases of liposuction involving the removal of several litres of fat in highly expanded skin and possibly additional stretch marks. It must be noted that this “double procedure” is rather rare.

What Else is New in Liposuction?

A quite modern improvement is the so-called “soft liposuction”, which is based on much more delicate infiltration techniques for the tumescent solution. This reduces pain significantly at the beginning of the operation, so that it is hardly noticeable.

Patients who do not believe in this, may be easily drugged down slightly to reduce their anxiety during the operation effectively.

The following chapter will inform you about the development of this fascinating “medical art”, that incited and roused interest in both patients and physicians a long time ago:

As far back as 1800s, surgeons tried to reduce local fat deposits operatively. After the “Rubens-figure” it became “en vogue” and fashionable to be slim. To achieve this, huge fat tissue flaps were cut off, resulting in long and disfiguring scars, that had to be tolerated at that time.

Subsequently in the 1920s, surgeons tried to reduce scarring by removing fat tissue through curettage, a very rough, painful and bloody procedure of scratching out fat under the skin with a sharp instrument. Frequently, these results were very bad and unsatisfactory. Nevertheless, these methods were implemented up to the 1970s, since surgeons were lacking any better techniques.

At the beginning of the 70s a small-built, yet gifted French surgeon with a big cigar, known as ILLOUZ, had the innovative idea of softening the fatty tissue by the infiltration of special fluids and afterwards suctioning it out. This was the birth of modern liposuction and it paved the way for more effective methods. ILLOUZ tried to destroy fat cells osmotically, by infiltration the tissue with distilled water and additional substances. After that, he suctioned the dissolved fat tissue with enormously thick cannulas measuring between 8 to 12 mm. This procedure obviously had to take place under general anesthesia.

The injected solutions had to be limited, in order to reduce tissue damage and in those times suction was very robust, bloody and imprecise . Frequently, blood units had to be administered in order to substitute the major loss of blood during operation.

One major complication was fat emboly, followed by several deaths - even in young patients. It was assumed that the reason for these deaths were the arduous operation methods, but the real reasons were never made clear.

Unfortunately, the media still mention these complications although there is hardly evidence of this due to significantly improved operative techniques in today’s times. According to my experience there is no reason to be afraid of this side effect nowadays.

You can find extensive information and answers to frequent questions pertaining to liposuction, the operative procedure and postoperative aftercare here: Liposuction Infos

Back to the Chapter Surgery of the Trunk

Your Appointment in Our Practice

I would be pleased to meet you in my practice for a consultation in Darmstadt-Griesheim. Please book an appointment telephonically. Please mail us for further information under info(at)dr.fenkl.de.

For a personal consultation call the number below at any time between 08:00 – 18:00 from Monday to Thursday

We use Google Analytics and Google Adwords on this site. This service sets cookies on your end device, which are used for statistical and advertising purposes. We have also integrated videos from YouTube. After activation of these services, your personal data will also be processed in the USA. The USA does not offer an adequate level of data protection, in particular your data is not sufficiently protected against access by the authorities there, and there are no effective legal remedies. We therefore only use the services mentioned after your consent. It is also possible to use our site without consent. Details in our data protection declaration.